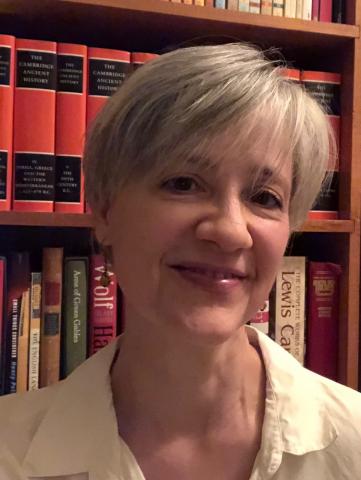 Anatole Mori came to the University of Missouri in 2000 after receiving an MA and PhD in Classics from the University of Chicago and a BA in Classics and Comparative Literature from the University of Virginia.  A specialist in early Hellenistic (3rd century BCE) literature, she teaches ancient Greek and reading courses in Greek literature as well as courses in translation on Greek culture and society, with a particular emphasis on ancient attitudes to gender and ethnicity.  Her interdisciplinary research examines the historical context of Greek poetry, focusing on how contact with other societies altered the traditional representation of Greek identity in literary culture.

Her book, The Politics of Apollonius Rhodius' Argonautica (Cambridge 2008) analyzes the reshaping of heroic epic in accordance with Ptolemaic ideology.  Most recently her article “Archives, Innovation, and the Neomorphic Cyclops," appeared in 2017 issue of Aitia on "The Rhetoric of Old and New in the Hellenistic Period” http://aitia.revues.org/.  Her work has appeared in the American Journal of Philology, Oral Tradition, and edited volumes for Blackwell and Brill. She is the recipient of a Loeb Classical Library Foundation Research Fellowship and an MU Arts and Science Faculty Fellowship. She is active in local organizations for the promotion of classics as well as the Classical Association of the Middle West and South. In 2011 she founded the Heartland Graduate Workshop in Ancient Studies, an annual meeting sponsored by graduate programs in the central United States for the promotion of scholarly and professional connections among graduate students in classics and related disciplines.

“What the Cyclops Saw: Self-Knowledge in Theocritus’ Idylls 6 and 11.” In L. Athansassaki, C. Nappa, and A. Vergados, (eds.) Gods and Mortals in Greek and Roman Poetry. Ariadne Supplement 2. 2019

“Literature in the Hellenistic World.” In M. Hose and D. Schenker (eds.) A Companion to Greek Literature. Blackwell Companions to the Ancient World. Malden MA & Oxford. 2016. 89-111